TORONTO, July 10, 2018 – According to the Royal LePage House Price Survey[1] and Market Survey Forecast released today, home price appreciation slowed across Canada in the second quarter of 2018, marked primarily by softness in the Greater Toronto Area (GTA), where many regions have witnessed year-over-year price declines. In contrast, a number of surrounding cities in Ontario’s Golden Horseshoe and beyond are now seeing significant year-over-year home price gains as a result of migration from the GTA as buyers seek homes in more affordable regions. Meanwhile, the Greater Montreal Area and suburban Vancouver experienced some of the highest year-over-year price appreciation in the country in the second quarter.

The Royal LePage National House Price Composite[2], compiled from proprietary property data in 63 of the nation’s largest real estate markets, showed that the price of a home in Canada increased 2.0 per cent year-over-year to $613,968 in the second quarter of 2018. When broken out by housing type, the median price of a two-storey home rose 0.8 per cent year-over-year to $720,504, while the median price of a bungalow climbed 1.8 per cent to $512,979. At a national level, condominiums posted a significantly higher rate of appreciation when compared to the detached segment, rising 8.1 per cent year-over-year to $435,421. Looking ahead, Royal LePage is projecting an uptick in home price appreciation in the third quarter and forecasts that the aggregate price of a home in Canada will increase 1.9 per cent over the next three months.

“It was a spring market that never blossomed,” said Phil Soper, president and CEO, Royal LePage.  “As anticipated in our original 2018 forecast, the new federal mortgage stress-test measures slowed the market to a standstill in much of the country, as some families adjusted their expectations in a world with lower borrowing capacity, and others not impacted by the OSFI regulations moved to the sidelines, adopting a ‘wait and see what happens to home prices’ approach.”

“The market has begun to absorb and adjust to the new realities; we expect an uptick in sales volumes and prices during the second half of 2018,” Soper continued. “The fundamentals have not changed. The economy is strong and unemployment is very low. We face shortages in our major cities, with many more people looking for homes than the market has available for purchase or rent. Upward pressure on prices will likely return to most markets during the third quarter.”

During the quarter, positive economic fundamentals remained supportive of Canada’s housing markets. The national unemployment rate is close to its lowest level in decades (6.0 per cent as of June) and there are positive trends in government and business investment. A number of factors could affect the market throughout the next three months of 2018, including whether or not the Bank of Canada decides to raise interest rates on July 11.

With NAFTA in negotiations and the possibility of a U.S.-initiated trade war, buyers whose employment would be directly affected have taken notice and have taken a cautious approach to home ownership.

“There is a cloud of uncertainty hovering over our economy and business environment,” concluded Soper. “Notwithstanding the economic drag that difficult American trade negotiations are creating, the national housing market is expected to remain in a long-term expansionary cycle, albeit at a slower pace than we have witnessed over the past couple years.”

In the second quarter of 2018, Ontario saw the most significant contrasts yet between home price appreciation rates in surrounding Golden Horseshoe cities and beyond compared to appreciation rates in central and suburban Toronto. This is the result of changing migration patterns in response to continued high home prices in many parts of the GTA. Factors include a combination of first-time and move-up buyers seeking more affordable detached homes further out, while retirees are selling their GTA homes and moving to less expensive regions. This trend was most prevalent in cities such as Windsor, Belleville/Trenton, Niagara/St. Catharines, Kingston, London, and Kitchener/Waterloo/Cambridge, which all saw double and high single-digit year-over-year home price increases in contrast to declines in the GTA. By the end of the third quarter, the aggregate price of a home in the GTA is expected to rise 2.1 per cent to $838,984 compared to the second quarter of 2018.  Respectively, the aggregate price of a home in Ottawa is expected to increase, rising 2.2 per cent to $449,140 compared to the second quarter of 2018.

“Despite recent price relief in the GTA market, buyers have continued to look to other Southern Ontario cities for housing affordability,” said Soper. “Our experts on the ground are seeing an increasing number of young families that are willing to say goodbye to the big city life, uprooting from the GTA altogether and migrating to more affordable regions in the province.”

This trend is reflected in Royal LePage’s Peak Millennial Survey[3], which found that home ownership was so important to peak millennial respondents across Canada that they would be willing to relocate to another city to own a house. It is also worth noting that young families are attracted to the type of home that is financially accessible in smaller centres. Big city living in Canada, similar to the rest of the economically advanced world, is essentially a condominium lifestyle. However, 61 per cent of respondents said they would prefer to buy a detached home. This was particularly true for couples with or anticipating children. Over half (52 per cent) of those surveyed would look to the suburbs when purchasing a property, and 59 per cent were looking out of the city core when it came time to raise a family.

“When you add an inflow of baby boomer retirees who are drawn to the same smaller cities for their charm and quiet appeal, it’s not surprising that home price appreciation rates in Windsor, Belleville, Niagara and Kingston are among the highest in the country, noticeably outpacing those being seen in the GTA,” continued Soper.

“Buyers looking in the GTA have found temporary relief, which is a stark contrast to the runaway price gains that characterized this time of year in 2017,” said Soper. “What we have seen in the first half of 2018 was the continuation of a broad-based residential housing correction that was triggered by declining affordability and government intervention. The effects have been most pronounced in the GTA’s ‘905’, which last year saw rapid price escalation, while the City of Toronto proper has remained relatively stable with moderate year-over-year home price increases.”

In Quebec, the Greater Montreal Area witnessed strong home price increases, supported by solid economic performance. GDP in the province has accelerated over the last two years, driven by Quebec households as well as business investment. As of June 2018, Quebec’s unemployment rate dropped to 5.4 per cent, below the national rate of 6.0 per cent. With unemployment still hovering at its lowest in the province in over 40 years, consumer confidence in the province is at an all time high. In the second quarter, the aggregate price of a home in the Greater Montreal Area increased 5.9 per cent, while Montreal Centre increased 7.1 per cent year-over-year – well over the 2.0 per cent aggregate price increase observed nationally. The last time that the region’s rate of home price appreciation surpassed that of the national aggregate was in the second quarter of 2011[4], when the year-over-year increase in prices in the Greater Montreal Area reached 6.4 per cent, versus 4.7 per cent nationally. Looking forward to the end of the third quarter, the Greater Montreal Area home price aggregate is forecast to increase 1.8 per cent to $398,220 compared to the second quarter of 2018.

“For the first time in nearly a decade, the pace of home price appreciation in Montreal has surpassed the national aggregate,” said Soper. “Quebec is an economic star in Canada, with strong employment, a stable fiscal situation and rising business investment. This is being reflected in Montreal’s residential real estate market, which is seeing robust home price growth across housing segments and is one of the healthiest markets in the country.”

In Western Canada, B.C. continues to see the highest home prices and appreciation rates in the country, including solid double-digit home price increases in several Greater Vancouver suburbs.  Looking ahead, Royal LePage experts in the Lower Mainland, however, have observed slowing market conditions – particularly as a result of new lending regulations and the B.C. government’s introduction of extensive new tax measures targeting the region’s housing market, combined with housing affordability challenges. By the end of the third quarter, the aggregate price of a home in Greater Vancouver is expected to rise 1.5 per cent to $1,289,120 compared to the second quarter of 2018.

In Alberta and Saskatchewan, a number of cities posted year-over-year price declines. When the national mortgage stress test regulations were implemented in January 2018, the region’s tentative housing recovery stalled and the market experienced a setback. However, in Calgary, the region’s largest urban centre, home prices are hanging onto recent gains as the employment picture brightens. By the end of the third quarter, the aggregate price of a home in Calgary and Edmonton is expected to rise 1.9 and 1.0 per cent to $493,820 and $381,177, respectively, compared to the second quarter of 2018. During the same period, the aggregate price of a home in Regina is expected to remain relatively flat in the third quarter, rising 0.2 per cent to $336,479 compared to the second quarter of 2018.

In Manitoba, Winnipeg home prices rose 1.8 per cent year-over-year to $293,932. According to Economic Development Winnipeg, the city had a strong year as real GDP increased by 3.7 per cent and the population increased to almost 750,000 or 1.9 per cent. By the end of the third quarter, the aggregate price of a home in Winnipeg is expected to rise 1.3 per cent to $297,817 compared to the second quarter of 2018.

The Globe and Mail: https://www.theglobeandmail.com/business/article-royal-lepage-sees-canadian-housing-prices-surging-in-late-2018/?cmpid=rss

The Royal LePage House Price Survey provides information on the three most common types of housing in Canada, in 63 of the nation’s largest real estate markets. Housing values in the House Price Survey are based on the Royal LePage National House Price Composite, produced quarterly through the use of company data in addition to data and analytics from its sister company, RPS Real Property Solutions, the trusted source for residential real estate intelligence and analytics in Canada.  Commentary on housing and forecast values are provided by Royal LePage residential real estate experts, based on their opinions and market knowledge.

Serving Canadians since 1913, Royal LePage is the country’s leading provider of services to real estate brokerages, with a network of close to 18,000 real estate professionals in more than 600 locations nationwide. Royal LePage is the only Canadian real estate company to have its own charitable foundation, the Royal LePage Shelter Foundation, dedicated to supporting women’s and children’s shelters and educational programs aimed at ending domestic violence. Royal LePage is a Brookfield Real Estate Services Inc. company, a TSX-listed corporation trading under the symbol TSX:BRE.

[1] Aggregate prices are calculated using a weighted average of the median values of all housing types collected. Data is provided by RPS Real Property Solutions.

[4] According to historical data from RPS Real Property Solutions. 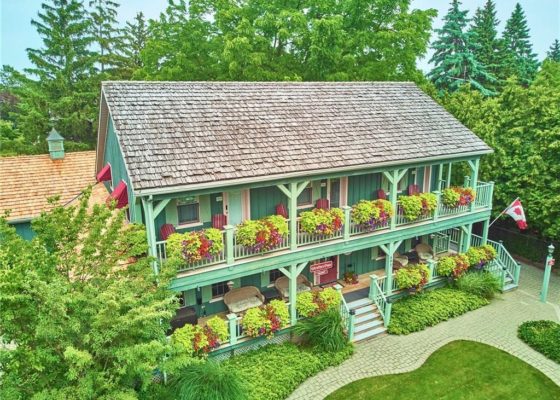 Niagara By the Numbers 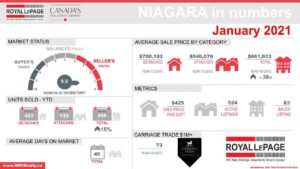 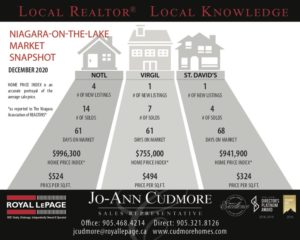 With nearly 22 years of residency in the Niagara area, Jo-Ann Cudmore has acquired an impressive level of knowledge in the various market niches throughout the Niagara area. She is the perfect choice if you are buying or selling a home in Niagara.